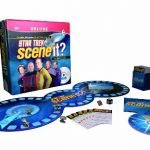 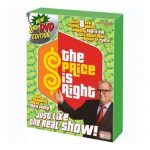 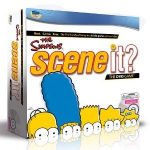 Featuring questions spanning all five-television series and ten feature films of the Star Trek franchise that range from The Menagerie to The Final Conflict, this Scene It? Deluxe Star Trek Edition also includes real television and movie clips, trivia questions, and a galaxy bursting with on-screen puzzlers.For 2 or more players, ages 13 and up.Contents: collectors tin, 1 DVD, flextime game board, party play, 4 collectable metal tokens, 175 trivia cards, 16 prime directive cards, 1 six-sided die, 1 eight-sided die and instructions.
Boldly go where no trivia game has gone before with Star Trek Scene It? Deluxe Edition. Recommended for ages 13 and older, this DVD/trivia game covers all 40 years of the Star Trek Franchise, from the original series to Star Trek: Enterprise. More than just a trivia game, Scene It? also challenges you to use observation, memory, wordplay, and problem-solving to decode special DVD puzzles. Designed for two or more players, this stellar trivia game is ideal for hard-core Trekkies and casual fans alike.

A Complete Star Trek Adventure
From the game pieces to the trivia cards, every aspect of Star Trek Scene It? has been infused with the spirit of Star Trek. The game begins with players choosing one of four collectible tokens to represent their team. Sculpted out of metal, these tokens have been modeled after the most famous ships in the series: the Enterprise, the Enterprise D, the Defiant, and the Voyager. The game board is collapsible and features two sizes, giving you the option of playing a 15-minute quick game or a 40-minute extended game.

Teams advance around the board by answering two types of questions: traditional trivia cards and DVD-based puzzles. The trivia cards, which resemble what you might find in Trivial Pursuit, come in three different categories: green “compendium” questions, red “events” questions, and yellow “culture” questions. They vary in difficulty, and some of the tougher questions are challenging enough to stump even the most seasoned Trekkies.

The main attraction, however, is the interactive DVD. Filled with video clips, sound bites and images from the franchise, the DVD challenges players to answer brain-teasing Trek puzzles. With a dozen different puzzle categories, the DVD puts your knowledge of Star Trek to the test. Categories include “Spatial Anomaly,” where players must identify a character based on a distorted image, and “Coded Transmission,” which challenges players to decrypt a secret message.

Something for Everyone — From Cadets to Fleet Captains
The DVD has been designed with the fans in mind. You’ll see cameos by your favorite characters, watch video clips from classic episodes, and be treated to narration by the Enterprise computer. You’ll even do battle with a Romulan Warbird in the tiebreaker mode. All in all, it’s a consummate Star Trek experience.

With hundreds of questions, Star Trek Scene It? has something for every type of Star Trek fan. It features questions from all six television shows and every motion picture (excluding the most recent 2009 film). The difficulty is also varied enough to keep everyone engaged — from Star Trek savants to casual fans. Some of the DVD challenges are so riveting that even non-fans will enjoy themselves.

Features clips and images from all five live-action TV series and 10 movies!
Great for casual and hardcore Trek fans
Includes four collectible metal ship tokens!
Race friends and family around the FlextimeTM game board – Be the first to make the Final Frontier!
175 trivia cards