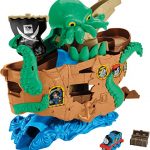 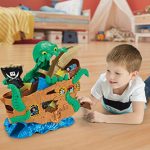 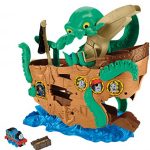 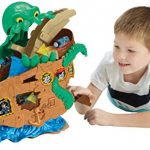 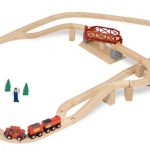 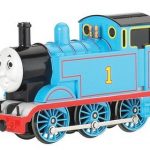 ​Thomas is in search of pirate treasure… and he needs your child’s help! Children can imagine “swashbuckling” adventures with this playset that includes a sea monster, pirate ship, treasure chest and die-cast metal Thomas engine. Thomas must also face the fearsome sea monster that has its eyes (and tentacles) on the treasure, too! Children can send Thomas up each level of the ship until he reaches the top, where the monster’s chomping fangs await. When Thomas reaches the top, the treasure is released and hurtles back down the ramp behind Thomas! The ship also features swashbuckling pirate-themed designs, including a few of Thomas’s friends decked out in pirate gear, ready to join the adventure. With Thomas & Friends Adventures, your child and Thomas can go wherever their imaginations take them!
Sea Monster playset with Thomas engine, pirate ship and treasure chest feature
Tip the ship to send the engine traveling up to the top
Sea Monster’s jaws chomp as engine travels up the ship and past the creature
Treasure chest is released down the ramp as engine travels past creature’s jaws
Helps develop gross motor skills and helps inspire Creativity and Imagination