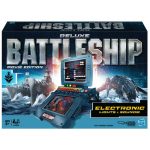 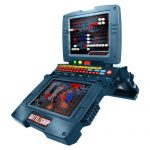 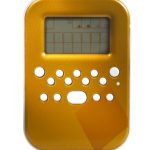 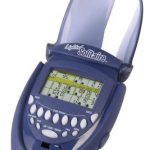 Lighted Solitaire
0 out of 5

You are at the helm in the fight for the future of the planet. Will you command the Alien Fleet or defend Humankind? Power up and scan the battlefield for locations to conceal your highly detailed, movie-based ships. Then, brace yourself for battle as electronic voice commands and sound effects signal your search-and-destroy mission to take out your opponent’s ships. Play on your own or battle a friend, and choose from three edge-of-your seat missions!
Electronic Battleship game puts you at the helm of battle with three different missions, electronic voice commands, realistic sound effects and highly detailed, movie-based Navy and Alien ships
Game features solo play option, sleek design and folding storage unit
Requires 3 “AA” batteries (not included)
For 1 – 2 players
Includes folding Battleship game unit with 2 storage trays, 5 Navy ships, 5 Alien ships, red, white and blue pegs, 3 red aircraft, 3 blue aircraft, label sheet, 4 rubber feet and rulebook