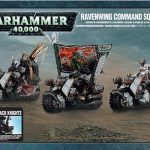 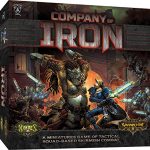 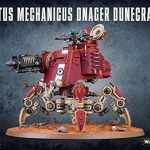 Those who survive in the Ravenwing long enough learn to take mobile warfare to the next level. If they can pass the Seven Rites of the Raven, they will be inducted into the Black Knights, the Inner Circle of the 2nd Company. Bike-mounted Command Squads consist of experienced Ravenwing Black Knights who form a swift bodyguard around a mounted officer, or execute other specialised missions. This kit can be used to make either a Ravenwing Command Squad or Ravenwing Black Knights. These miniatures are rich in the iconography of the Dark Angels, with winged motifs adorning the bikes, and extending from the back of them, while the bikes themselves feature fat exhausts, grills and chunky tires. Most notable about the unit is the beautifully embossed, amazingly detailed banner, which would make a resplendent centrepiece for the unit. Included within the kit are a corvus hammer, teleport homer, plasma talon, and options of an Apothecary and Champion for the Command Squad. This kit contains 122 components, a Space Marines Transfer Sheet and three bike bases with which to make a Ravenwing Command Squad.
Ravenwing Command Squad Dark Angels Warhammer 40K Miniature Game Games Workshop
Miniatures are supplied unpainted and assembly is required.
Additional miniatures and rule books are required to play Warhammer 40K
Includes 3 Miniature
Miniatures made of Plastic.